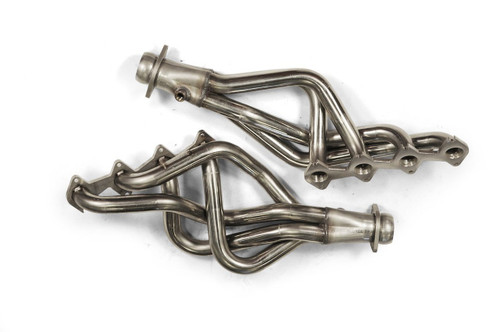 You will see Huge Power Gains with these Kooks Longtube Headers. It isn't unheard of to see over 30rwhp gains from these headers alone with a good tune. Kooks is the best name in the industry when it comes to headers, they have been in business for over 50 years. They make nothing but high quality products. When choosing headers for your mustang it is very important to choose a company that makes good quality products so that you don't get leaks and have serious problems in the long-run and end up wasting money. Here at performance mods we believe in Kooks so much that we use Kooks headers in our 2013 Twin Turbo Mustang. Don't make the mistake of purchasing inferior headers and regretting it later on in life.

These headers are made out of T-304 Stainless Steel and will match up to your choice of Kooks Mid pipe. Also included are 02 sensors, gaskets, and hardware.

This product hasn't received any reviews yet. Be the first to review this product!